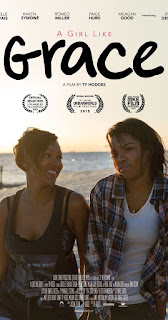 A GIRL LIKE GRACE makes it's television premiere on Sept, 8th on B.E.T network.

A GIRL LIKE GRACE follows 17-year-old GRACE (Ryan Destiny), who grows up in a dysfunctional home raised by her single mother LISA (Garcelle Beauvais). GRACE fights for acceptance in the world while being bullied at school by MARY (Raven-Symone'). GRACE looks for guidance from her best friend "ANDREA" (Paige Hurd) and becomes heavily influenced by "ANDREA'S" older sister "SHARE" (Meagan Good). A GIRL LIKE GRACE spirals into a dark world of sex, rebellion and her idea of womanhood.

A GIRL LIKE GRACE is written by Jacquin DeLeon and Ty Hodges and directed by Ty Hodges.

OPRAH SITS DOWN WITH DEVON FRANKLIN AND MEAGAN GOOD

Oprah speaks with Hollywood power couple DeVon Franklin and Meagan Good about faith, courtship and marriage. They also reveal the key to their successful relationship.

Watch Clips from the interview at: www.supersoul.tv
Posted by admin at 8:27 PM No comments: