New Movie Release: If Not Now, When? Directed by Tamara Bass and Meagan Good on Jan 8, 2021 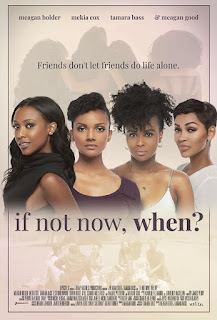 Four friends, who met in high school and are bonded by an event, are suddenly forced back together when one of them suffers a crisis. It's a story of love, forgiveness and the incredible bond between women.
If Not Now, When? will be released on demand on Jan 8, 2021.
The film stars Meagan Good (Think Like A Man), Tamara Bass (Baby Boy, Boston Public), Mekia Cox (The Rookie, Chicago Med)  and Megan Holder (Unreal, Pitch).
The film is written by Tamara Bass and directed by Meagan and Tamara.
ABC7's On The Red Carpet Chatted with Tamara and Meagan about their new film at abc7.com
at January 02, 2021